The Insanity
of God

A True Story of Faith Resurrected 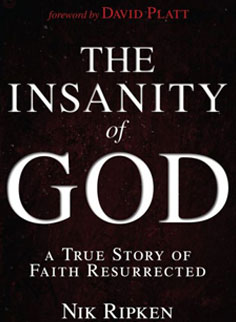 The title of our first book, The Insanity of God, has caused trouble for itself. Many people, especially those of us of a more mature age, feel that the title implies that God Himself is insane. Nothing could be further from the truth. Many who have been concerned about the title have implied that it was chosen purely for marketing purposes. Nothing could be further from the truth.

The longer that one is, generationally, within Christianity the more they cease to look at the kingdom of God from a point of view of one who is outside of that kingdom. To those, when one talks about a God who would give his only Son to die on a cross, this would be the act of someone who is insane. What God would do such a thing? When we are asked about where we have gone and what we have done the last 30 years, talking about being salt and light in places like Somalia the stares and comments we receive question our sanity. We have been told that we are crazy.

The title, The Insanity of God, was a result of a lot of perspiration in seeking God’s title for the book. About seven of us struggled for weeks over this title. Finally the day came when we had to come up with a title. For hours we talked about titles that included words like “sheep among wolves, the foolishness of God,” and other biblically based, well–used themes. We had possibly 10 poster-sized sheets of paper posted around the room. We knew there was a title “out there” that God wanted us to use, but we were having difficulty placing our fingers on the pulse of God.

Finally, we took a break to clear our heads and to start over again.

Walking back into the room my eyes were drawn to the many sheets of paper and the dozens of titles and subtitles posted about the room. I thought about all the conversations we had had concerning the content of this ministry. Without thinking I looked at our friends who had struggled alongside of us for most of a morning and said to them, ” everything we have talked about today represents from God’s word and our experiences the insanity of God.”

Our literary agent, a man sent from the throne of God, slapped his hand on the table in front of him and said, ” God has given us His title.”

Did you see the movie or read the book?

We’d love to hear from you! Leave your feedback in the Comment Section

Get Updates from
Nik Ripken Ministries